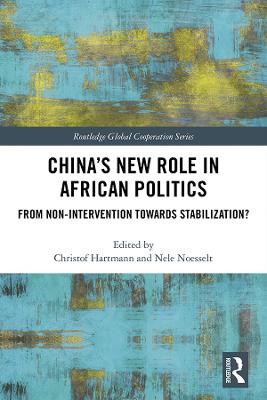 China's New Role in African Politics: From Non-Intervention towards Stabilization?

China's rise to global power status in recent decades has been accompanied by deepening economic relationships with Africa, with the New Silk Road's extension to Sub-Saharan Africa as the latest step, leading to much academic debate about the influence of Chinese business in the continent. However, China's engagement with African states at the political and diplomatic level has received less attention in the literature. This book investigates the impact of Chinese policies on African politics, asking how China deals with political instability in Africa and in turn how Africans perceive China to be helping or hindering political stability.

While China officially operates with a foreign policy strategy which conceives of Africa as one integrated monolithic area (with the Forum on China-Africa Cooperation (FOCAC) the flagship of inter-continental cooperation), this book highlights the plurality of context-specific interaction patterns between China and African elites, demonstrating how China's role and relevance has differently evolved according to whether African countries are resource-rich and geostrategically important from the Chinese perspective or not. By looking comparatively at a range of different country cases, the book aims to promote a more thorough understanding of how China reacts to political stability and instability, and in which ways the country contributes to domestic political dynamics and stability within African states.

China's New Role in African Politics will be of interest to researchers from across Political Science, International Relations, International Law and Economy, Security Studies, and African and Chinese Studies.

Other Editions - China's New Role in African Politics: From Non-Intervention towards Stabilization? by Christof Hartmann A Preview for this title is currently not available.
More Books By Christof Hartmann
View All