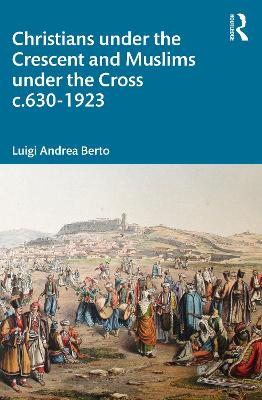 This book examines the status that rulers of one faith conferred onto their subjects belonging to a different one, how the rulers handled relationships with them, and the interactions between subjects of the Muslim and Christian religions.

The chronological arc of this volume spans from the first conquests by the Arabs in the Near East in the 630s to the exchange between Turkey and Greece, in 1923, of the Orthodox Christians and Muslims residing in their territories. Through organized topics, Berto analyzes both similarities and differences in Christian and Muslim lands and emphasizes how coexistences and conflicts took directions that were not always inevitable. Primary sources are used to examine the mentality of those who composed them and of their audiences. In doing so, the book considers the nuances and all the features of the multifaceted experiences of Christian subjects under Muslim rule and of Muslim subjects under Christian rule.

Christians under the Crescent and Muslims under the Cross is the ideal resource for upper-level undergraduates, postgraduates, and scholars interested in the relationships between Christians and Muslims, religious minorities, and the Near East and the Mediterranean from the Middle Ages to the early twentieth century.

Buy Christians under the Crescent and Muslims under the Cross c.630 - 1923 by Luigi Andrea Berto from Australia's Online Independent Bookstore, BooksDirect.

A Preview for this title is currently not available.
More Books By Luigi Andrea Berto
View All

The Little History of the Lombards of Benevento by Erchempert: A Critical Edition and Translation of 'Ystoriola Longobardorum Beneventum degentium'
Luigi Andrea Berto
Hardback , Jul '21
RRP: $252.00 $249.48