'You feel like you have met Jesus. I wholeheartedly endorse this book as a must read.' Russell Evans, Senior Pastor, Planetshakers International Church

'Greg Sheridan cuts through the thicket of scholars and skeptics to reclaim the New Testament and return us to the Word, as it was in the beginning.' Chris Uhlmann, political editor and columnist

'I love reading what Greg Sheridan has to say about faith. He is consistently interesting and challenging.' Nicky Gumbel, pioneer of the Alpha course on Christianity

From the historical Jesus and his disciples through to the present day, Greg Sheridan has written an impassioned, informed and utterly compelling case for the truth and importance of Christianity in our lives. He presents a strong argument for the historical reliability of the New Testament, meets the living Jesus there, explores the extraordinary personality of Paul, celebrates Mary's activism and examines the magnificent richness of John.

Filled with insights, intelligence, warmth and humour, Greg also introduces us to a range of fascinating Christians today, among them political leaders, and young activists offering the radical Christian interpretation of love to their generation. His book explores the journey of those who have been guided by faith, such as Gemma Sisia, whose school in Tanzania has transformed the lives of thousands of children, and the dynamic Chinese Christians pursuing their beliefs under harsh restrictions. He examines where Jesus can be found in popular culture and talks to Christian leaders - Pentecostal, Catholic, Evangelical and others - in Australia, the US and Britain.

At a time when the chasm of understanding between secularism and faith has never seemed wider, Christians is timely, relevant and convincing.

'At the heart of the Christian story is the truth about the life of Jesus ... Greg Sheridan's book is a good read about Good News.' Peter Comensoli, Catholic Archbishop of Melbourne

'If there is ever going to be a Renaissance of Christian belief to save us from the dreariness of much secular humanism, it will come from a book like Christians. I will be buying it and giving it away to believers and sceptics alike.' John Dickson, author and historian

Other Editions - Christians by Greg Sheridan 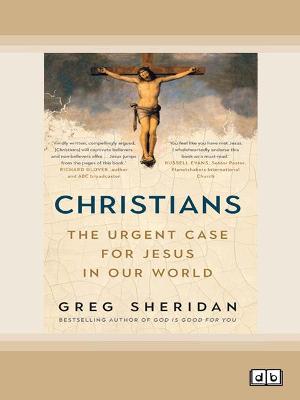 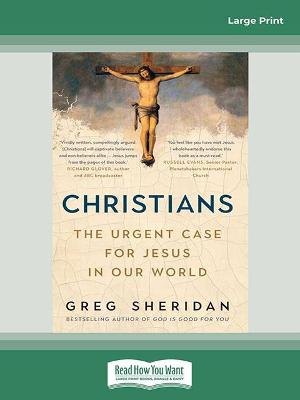