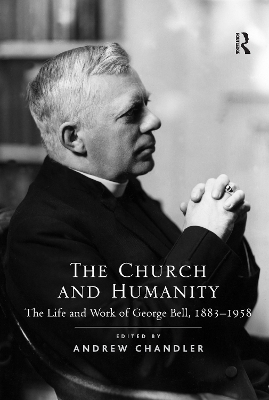 The Church and Humanity

Description - The Church and Humanity by Andrew Chandler

George Bell remains one of only a handful of twentieth-century English bishops to possess a continuing international reputation for his involvement in political affairs. His insistence that Christian faith required active participation in public life, at home and abroad, established an eminent, and often provocative, contribution to Christian ethics at large. Bell's participation in the tragic history of the German resistance against Hitler has earned him an enduring place in the historiography of the Third Reich; his February 1944 speech protesting against the obliteration bombing of Germany, made in the House of Lords, is still often considered one of the great prophetic speeches of the twentieth century. Throughout his long career, Bell became a leading light in the burgeoning ecumenical movement, a supporter of refugees from dictatorships of all kinds, a committed internationalist and a patron of the Arts. This book draws together the work of leading international historians and theologians, including Rowan Williams, and makes an important contribution to a range of ongoing political, ecumenical and international debates.

Other Editions - The Church and Humanity by Andrew Chandler A Preview for this title is currently not available.
More Books By Andrew Chandler
View All