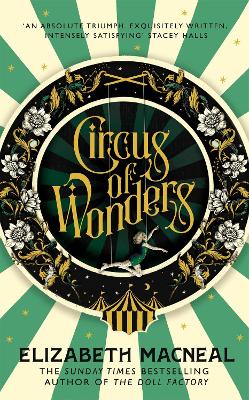 It is 1865 and in a coastal village in southern England, Nell picks violets for a living. Set apart from her community because of the birthmarks that pepper her skin, Nell keeps her head down and her sights small: her world is her beloved brother and devotion to the sea.

Then, Jasper Jupiter's Circus of Wonders arrives on the outskirts of the village. Nell keeps her distance, but the night after the circus has apparently left, she is kidnapped. Her father has sold her, promising Jasper Jupiter his very own leopard girl. It is the greatest betrayal of Nell's life, but as she comes to know the other performers and Jasper's quieter, gentler brother Toby, Nell begins to wonder if becoming part of the Circus of Wonders is the best thing that has ever happened to her.

Toby has always stuck to his brother's side: the shadow to his brother's luminous light. When Jasper served in the Crimean War, Toby followed with his camera, and they share a secret - hidden amongst the carnage of those battlefields - which binds them together.

But Toby is captivated by Nell. She has become Nellie Moon, the star of Jasper's show. In London she is written up in the papers as the eighth wonder of the world, figurines are cast in her image, and crowds rush to watch her soar through the air.

But who gets to tell Nell's story? And as she falls in love with Toby, can they plot their escape? As the world Jasper has created threatens to crash to the ground around him, Toby must decide where - finally - his loyalty lies.

This is a novel with a vivid, brilliant cast of characters and themes of creativity and ownership, beauty and power, success and crashing failure, and the Victorian obsession with spectacle.

Other Editions - Circus of Wonders by Elizabeth Macneal A Preview for this title is currently not available.
More Books By Elizabeth Macneal
View All