Cities as Engines of Sustainable Competitiveness

Reflecting on two decades of 'competitiveness-oriented' urban policies in Europe, this book investigates the current challenges cities face to sustain their economic position and how this can be balanced with social progress and environmental improvements. Complementing previous surveys on local and urban development and competitiveness-based strategies, this volume provides longer term views on the evolution of such policies at the city level, from the personal perspective of city officials in eight European cities. More concretely, it looks at how the urban dimension in EU policies have evolved over time, the kinds of urban policy supported by the EU over the last two decades and how cities have been involved with this process. The book investigates the portfolios of competitiveness-oriented policies which have been developed by European cities and how they see the link between urban/spatial development policies and sustainable competitiveness. Finally the book fleshes out a number of challenges and initiatives taken by the eight European cities and their governments in the face of current challenges in order to pave the way towards more competitive and sustainable urban economies. 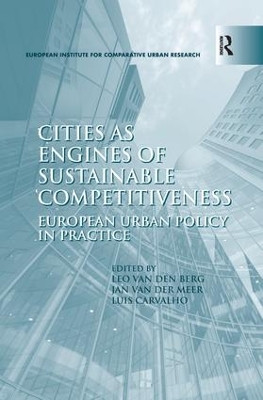 A Preview for this title is currently not available.
More Books By Leo van den Berg
View All