City of Lies: the Keepers 2

Description - City of Lies: the Keepers 2 by Lian Tanner

In the last few months she had had more than a dozen messages from the museum, asking when she was going to take up her position as Fifth Keeper. Tonight she would reply. 'Never.'

Goldie Roth is a trained thief and a skilful liar. She's supposed to be one of the keepers of the mysterious Museum of Dunt, along with her friend Toadspit. But although she desperately wants to be a keeper, her parents are ill and she will not leave them. Then Toadspit's sister Bonnie is stolen, and Goldie is forced into action. She and Toadspit follow the child-stealers to the neighbouring city of Spoke. Along the way, Toadspit is also captured, and Goldie discovers some dangerous secrets - secrets that the child-stealers will kill to protect. She will need all her skills as a thief and a liar if she is to survive and save her friends. But survive she must. Because the Fugleman has returned to Jewel, and the Fifth Keeper will soon be needed more than ever .

Other Editions - City of Lies: the Keepers 2 by Lian Tanner 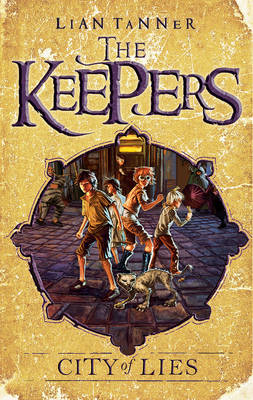