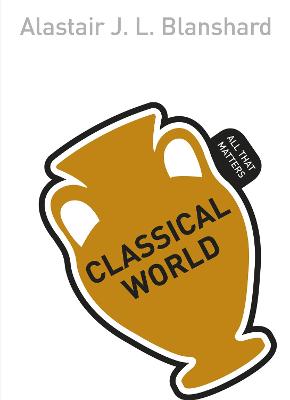 Classical World: All That Matters

Description - Classical World: All That Matters by Alastair Blanshard

Modern Western European culture would have been impossible without the civilizations of ancient Greece and Rome. The disciplines of philosophy, drama, history, art, and mathematics all owe an immense debt to these two Mediterranean cultures. At the same time, there are aspects of this legacy that are less worthy of celebration. Slavery went hand in hand with democracy. The pursuit of beauty coexisted with breathtaking acts of brutality. Ancient writers have been used to support everything from colonial expansion and the trade in human flesh to the rejection of female franchise. Women suffered for centuries at the hands of doctors who were guided by bizarre notions found in ancient gynecological treatises.This book attempts to address two questions. Firstly, what are the distinctive features of the cultures of Greek and Roman that separate them out from other ancient civilizations? Secondly, why have these cultures been so influential on subsequent societies? It is this dual focus that makes this book distinctive. This book is not just about Greece and Rome. It is equally about why Greece and Rome mattered to people in the past, and why they should matter to us today. Each chapter in the book begins with a story or an incident that is designed to illustrate these themes. The first three chapters of the books (Homer, Athens, and Rome) are intended to give a chronological overview of the period. They will orientate the reader to the key places, actors, and historical trends. The remaining chapters focus on some of the most important and influential aspects of Greco-Roman culture.

A Preview for this title is currently not available.
More Books By Alastair Blanshard
View All