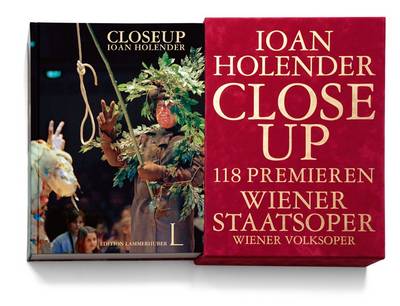 Description - Close Up by Ioan Holenader

On 632 pages, Ioan Holender, former director of the Vienna State Opera, recollects all 118 premieres of his term, which lasted from 1991 to 2010, relating his impressions in a very personal and intimate way. During numerous meetings with editor Lois Lammerhuber, Ioan Holender described the turbulent and moving, sometimes dramatic and sometimes joyful, course of these productions. The stories reflect Ioan Holender's deep passion for opera and its protagonists. Axel Zeininger's photographs provide a great variety of insights into 19 years of opera, with the stars of generations of singers, from Placido Domingo to Anna Netrebko. Facsimile prints of the original playbills make this book an extraordinary document. The volume is rounded off with analyses by arts journalists Gert Korentschnig, Karl-Heinz Roschitz, Heinz Sichrovsky and Wilhem Sinkovicz. Text in English & German. AUTHOR: Ioan Holender had a brief career as a singer, before he founded a very successful opera agency. After the death of Eberhard Waechter, Holender was appointed director of the Vienna State Opera in 1992 and remained in office for 19 years. Heinz Sichrovsky was born in Vienna in 1954. He heads the culture department of the weekly magazine NEWS and is a member of the chief editorial board. Wilhelm Sinkovicz studied composition at the conservatory and musicology at Vienna University and has been working as a music critic for the daily newspaper Die Presse since 1984. He also teaches at the Vienna University of Music, the Vienna Private Music Conservatory and at Vienna University, and has published numerous books. Karlheinz Roschitz studied German philology, art history and history. He started his career as a journalist at the daily newspaper Kurier and later became head of the culture department of the daily Krone. He lectures on literature and communication theory and has written 25 books. Gert Korentschnig heads the culture and media editorial department of the daily Kurier, where he is also first music critic and vice-editor in chief. Axel Zeininger has been working for many years as a photographer at Kurier, Der Spiegel, GEO and Stern. In 1984, Zeininger was awarded Photographer of the Year by the international specialist magazine Opernwelt. Lois Lammerhuber is a photographer and publisher. His photos have been published in hundreds of books and magazines and received international prizes. Three times he was awarded the Graphis Photo Award for best reportage of the year. In 1996, he founded the Edition Lammerhuber publishing company. SELLING POINTS: This book on one of the most acclaimed opera houses in the world and one of the longest-serving and most renowned opera directors provides glimpses of how opera really works Exciting, sensual and intriguing - the backstage stories from the world of opera, about stars from Placido Domingo to Anna Netrebko Double-spread pictures of all 118 premieres during Ioan Holender's time as director of the Vienna State Opera and facsimile prints of the original playbills make this book an extraordinary document A unique gift book of sumptuous design, a must-have for all opera lovers! ILLUSTRATIONS: 293 colour illustrations