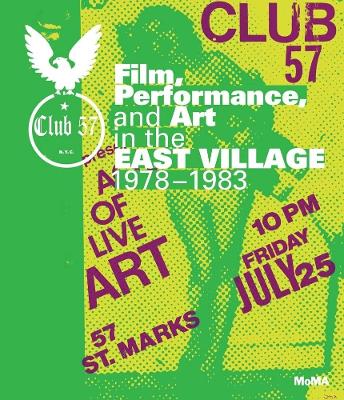 An in-depth examination of the iconic alternative space Club 57.

Located in the basement of a Polish Church at 57 St. Marks Place, Club 57 (1978-83) began as a no-budget venue for music and film exhibitions, and quickly took pride of place in a constellation of countercultural venues in downtown New York fuelled by low rents, the Reagan presidency and the desire to experiment with new modes of art, performance, fashion, music and exhibition. A centre of creative activity in the East Village, Club 57 is said to have influenced virtually every club that came in its wake. Published to accompany the first major exhibition to examine the scene-changing, interdisciplinary life of downtown New York's seminal alternative space in full, Club 57: Film, Performance, and Art in the East Village, 1978-1983 taps into the legacy of Club 57's founding curatorial staff to examine how the convergence of film, video, performance, art and curatorship in the club environment of New York in the 1970s and 1980s became a model for a new spirit of interdisciplinary endeavour. The richly illustrated publication will feature film and video stills; photographs of Club event and activities; ephemeral documents such as flyers, posters and period zines; and a robust plate section of rarely-seen artwork from the period by the likes of Keith Haring, Kenny Scharf, Tseng Kwong Chi, Kitty Brophy, Fab Five Freddy, Richard Hambleton, Dan Asher, Ellen Berkenblit and John Sex.

A Preview for this title is currently not available.
More Books By Ron Magliozzi
View All