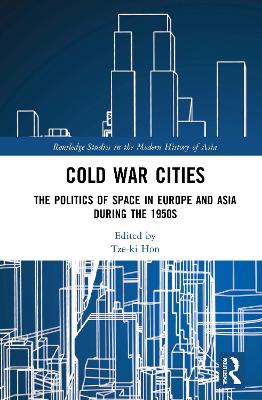 Cold War Cities: The Politics of Space in Europe and Asia during the 1950s

Description - Cold War Cities: The Politics of Space in Europe and Asia during the 1950s by Tze-ki Hon

This book is a dynamic study of the range of experiences of the Cold War in Europe, East Asia and Southeast Asia in the 20th century.

Comprised of ten chapters from a diverse team of scholars from Europe, East Asia, and North America, this edited volume furthers the study of the Cold War in two ways. First, it underscores the global scope of the Cold War. Beginning from Europe and extending to East and Southeast Asia, it focuses attention on the overlapping local, national, regional, and international rivalries that ultimately divided the world into two opposing camps. Second, it shows that the Cold War had different impacts in different places. Although not all continents are included, this volume demonstrates that the bipolar system was not monolithic and uniform. By comparing experiences in various cities, this book critically examines the ways in which the bipolar system was circumvented or transformed - particularly in places where the line between the Free World and the Communist World was unclear.

Cold War Cities will appeal to students and scholars of history and Cold War studies, cultural geography and material cultures, as well as East and Southeast Asian studies.

Buy Cold War Cities: The Politics of Space in Europe and Asia during the 1950s by Tze-ki Hon from Australia's Online Independent Bookstore, BooksDirect.