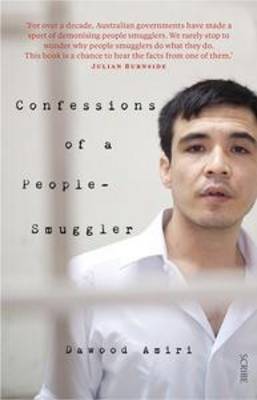 Description - Confessions Of A People-Smuggler by Amiri Dawood

Dawood Amiri is an ethnic Hazara who, as a young man, made the fateful decision to flee the terror being inflicted on his people, and seek asylum in Australia. He arrived in Indonesia in 2010, but was eventually captured when he was about to board a boat headed for Christmas Island. After a long stint in detention, where immigration processes failed to help him, he escaped and began working for people-smugglers to aid his fellow asylum-seekers, and to raise money for his own passage to Australia. Amiri was eventually arrested as a people-smuggler himself, after having helped gather passengers for a boat that was recklessly overloaded by his bosses and sank en route to Christmas Island, with the loss of 96 lives. Among the dead were two of Amiri's best friends; that day, he 'swore at God'. He was sentenced to six years' jail in Jakarta's Cipinang prison, while the kingpins, at the time, remained free. A revelatory tale of compassion, love, sacrifice, and survival, Confessions of a People-Smuggler is a surprising insight into the desperation of asylum-seekers and the economics of the highly organised people smuggling industry, as well as the corruption that has enabled it. 'Shows the human side of those fleeing their home countries and seeking asylum . . . starkly written and compelling, it takes you into an underworld of desperate, stateless and unwanted people and shows a reality that so many of us turn away from.' Books & Publishing