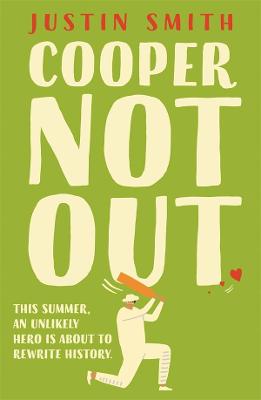 Description - Cooper Not Out by Justin Smith

A delightfully uplifting Australian novel about the joy of discovering your greatest potential.

'I'm calling it...this is THE book of summer.' GOOD READS

In the Australian summer of 1984, in the small country town of Penguin Hill, Sergeant Roy Cooper is making a name for himself. He's been batting for his local cricket club for decades - and he's a statistical miracle. He's overweight, he makes very few runs, he's not pretty to watch, but he's never been dismissed.

When local schoolgirl Cassie Midwinter discovers this feat, she decides to take the matter further. The remarkable story finds its way into the hands of Donna Garrett, a female sports columnist who's forced to write under a male pseudonym to be taken seriously.

That summer, the West Indies are thrashing Australia, and the Australian people's love of cricket has never been lower. But Donna's columns on Roy Cooper capture the imagination of a nation, and soon there's pressure to select him for the national team. This would see him playing at the Melbourne Cricket Ground, carrying the spirit of every small country town in Australia along with him. Could such a miracle actually happen?

This is sport, after all, and who doesn't love a good story?

COOPER NOT OUT is a funny, heart-warming novel set within real events. It is a moving and highly original tale about friendship and belief, and the joy of discovering your greatest potential.

'Cooper Not Out is the story Australia needs right now. This beautifully written book highlights life's simple pleasures, like a game of country cricket, but its emotional complexity is what makes it really sing. Justin Smith deftly handles issues of class, pride, gender, machismo, and social norms around sexuality. Frankly, it's a ripping read that will make your heart swell. Roy Cooper is a hero for our times.' Tracey Spicer

'I am gobsmacked. I love cricket. I love stories. I love books so I have just won the trifecta! Think The Castle, think Phar Lap, think Rocky all rolled into one. I laughed, I cried, I couldn't put it down. This beautifully written tale has everything - it's funny, heartwarming, nostalgic and most importantly manages to brilliantly create an atmosphere of anticipation that keeps you coming back for more. I'd give it 6 stars if I could!' Better Reading

Buy Cooper Not Out by Justin Smith from Australia's Online Independent Bookstore, BooksDirect.

A Preview for this title is currently not available.
More Books By Justin Smith
View All