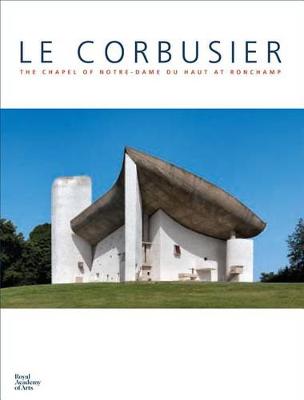 The Chapel of NotreDame du Haut at Ronchamp

Le Corbusier's Chapel of Notre Dame du Haut in Ronchamp, eastern France, is one of the most unique and surprising religious buildings of the twentieth century. Replacing an earlier church that had been destroyed in the Second World War - a church that itself had been built on the site of a fourth-century Christian chapel - Le Corbusier transformed an ancient pilgrimage site into a dramatic work of modern art. In this insightful and beautifully illustrated volume, Maria Antonietta Crippa and Francoise Causse explore the particular set of circumstances that led one of the twentieth century's most famous exponents of urbanism to create an ethereal space of worship on a remote hill in the French countryside. As well as putting the chapel into its historical context and exploring the controversies and arguments that have surrounded it, this book - part of a series that began with Matisse: The Chapel at Vence (RA Publications, 2013) - features stunning new photographs that capture the genius of Le Corbusier's design. AUTHOR: Maria Antonietta Crippa is an architect and professor at Politecnico de Milano. Francoise Causse is former professor at Ecoles normales d'instituteurs de Douai and Mont-de-Marsan. SELLING POINTS: . Includes striking new photographs detailing this extraordinary work of architecture . The chapel is a popular pilgrimage site as well as being of huge architectural importance 200 colour

A Preview for this title is currently not available.
More Books By Maria Antonietta Crippa
View All