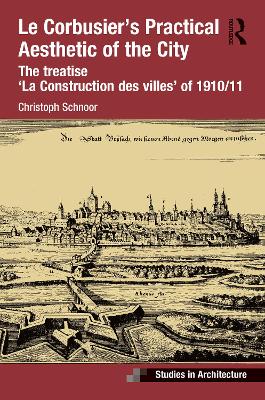 Set within an insightful analysis, this book describes the genesis, ideas and ideologies which influenced La Construction des Villes by Le Corbusier. This volume makes the important theoretical work available for the first time in English, offering an interpretation as to how much and in what way his 'essai' may have influenced his later work.

Dealing with questions of aesthetic urbanism, La Construction des Villes shows Le Corbusier's intellectual influences in the field of urbanism. Discontent that the script was not sufficiently avant-garde, he abandoned it soon after it was written in the early 20th century. It was only in the late 1970s that American historian H. Allen Brooks discovered 250 pages of the forgotten manuscript in Switzerland. The author of this book, Christoph Schnoor, later discovered another 350 handwritten pages of the original manuscript, consisting of extracts, chapters, and bibliographic notes. This splendid find enabled the re-establishment of the manuscript as Le Corbusier had abandoned it, unfinished, in the spring of 1911.

This volume offers an unbiased extension of our knowledge of Le Corbusier and his work. In addition, it reminds us of the urban design innovations of the very early 20th century which can still serve as valuable lessons for a new understanding of contemporary urban design.