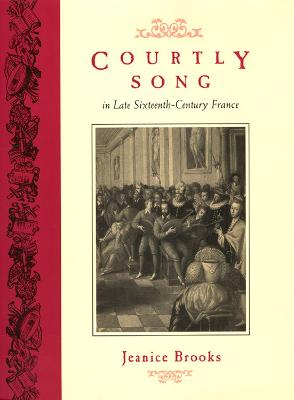 In the late sixteenth century, the French royal court was mobile. To distinguish itself from the rest of society, it depended more on its cultural practices and attitudes than on the royal and aristocratic palaces it inhabited. Using courtly song-or the air de cour-as a window, Jeanice Brooks offers an unprecedented look into the culture of this itinerant institution.

Brooks concentrates on a period in which the court's importance in projecting the symbolic centrality of monarchy was growing rapidly and considers the role of the air in defining patronage hierarchies at court and in enhancing courtly visions of masculine and feminine virtue. Her study illuminates the court's relationship to the world beyond its own confines, represented first by Italy, then by the countryside. In addition to the 40 editions of airs de cour printed between 1559 and 1589, Brooks draws on memoirs, literary works, and iconographic evidence to present a rounded vision of French Renaissance culture.

The first book-length examination of the history of air de cour, this work also sheds important new light on a formative moment in French history.

A Preview for this title is currently not available.
More Books By Jeanice Brooks
View All