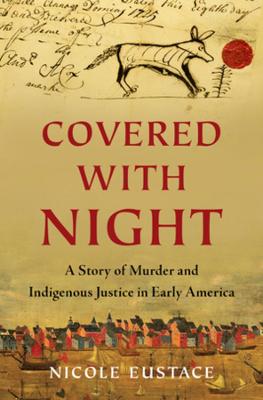 Covered with Night: A Story of Murder and Indigenous Justice in Early America

Description - Covered with Night: A Story of Murder and Indigenous Justice in Early America by Nicole Eustace

In the summer of 1722, on the eve of a conference between the Five Nations of the Iroquois and British-American colonists, two colonial fur traders brutally attacked an Indigenous hunter in colonial Pennsylvania. The crime set the entire mid-Atlantic on edge, with many believing that war was imminent. Frantic efforts to resolve the case created a contest between Native American forms of justice, centered on community, forgiveness, and reparations, and an ideology of harsh reprisal, based on British law, that called for the killers' execution.
In a stunning narrative history based on painstaking original research, acclaimed historian Nicole Eustace reconstructs the crime and its aftermath, taking us into the worlds of Euro-Americans and Indigenous peoples in this formative period. A feat of reclamation evoking Laurel Thatcher Ulrich's A Midwife's Tale and Alan Taylor's William Cooper's Town, Eustace's utterly absorbing account provides a new understanding of Indigenous forms of justice, with lessons for our era.


Buy Covered with Night: A Story of Murder and Indigenous Justice in Early America by Nicole Eustace from Australia's Online Independent Bookstore, BooksDirect.

A Preview for this title is currently not available.
More Books By Nicole Eustace
View All