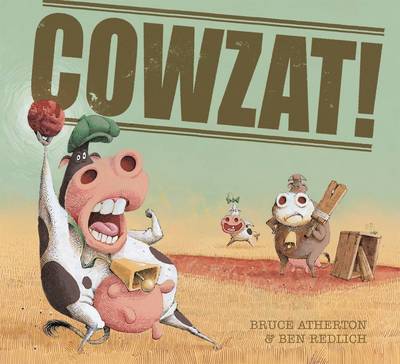 'One balmy day down under in a paddock by a stream, A herd of cows was eating grass and making milk and cream. When one of them a Jersey cow called Jenny Bramble Rose, Began to twitch because she sniffed a cricket up her nose. She sneezed and sent a gritty ball of pasture through the air, It bounced upon a strip of ground the goats had eaten bare ' At last the true story of how cricket was invented! Not in England or even in India, but right here in Australia! It was on one fateful day when dairy cow Daisy May got a cricket up her nose and sneezed. Her friend Floppy May grabbed a stick from a nearby willow tree and whacked the flying cricket over the fence with a pleasant-sounding click. All the other cows gathered round to have a go and very soon they had worked out a set of rules and were playing cricket, the new craze, in the paddock from dawn till dusk Told in rollicking verse and with zany illustrations, this book will bowl you over! AUTHOR: Bruce Atherton is the author of the junior fiction novel, Al Dentay and the Incredible Spaghetti Machine and four picture books: 'The Billycart Ride', Illustrated by Keith Mc Ewan, 'Tough Ol' Teddy', illustrated by Elise Hurst, 'The Pumpkin Eater' from Pondicherry, illustrated by Ben Redlich, and 'Cowzat' also illustrated by Ben Redlich. Both 'The Billycart Ride' and 'Tough Ol' Teddy' were shortlisted for the Australian Speech Pathology Book of the Year Awards. Ben Redlich's foray into children's book illustration came with 'The Shikker Cola Cows', written and self-published by the author. Ben has over 20 books published, both nationally and internationally. These include 'Jack and the Aliens' and its sequel, 'Jack and the Skyhook', Word Weavers Press, Brisbane; the CBCA notable book, 'The Great Montefiasco' by renowned author/illustrator Colin Thompson, Lothian, Melbourne; 'Circus Carnivore', written by Mark Svendsen, Lothian, Melbourne, and published in the US by Houghton Mifflin; 'Whacko the Chook', also written by Mark Svendsen and also a CBCA notable book, 'Lothian; The Pumpkin Eater' from Pondicherry, written by Bruce Atherton, Lothian; the 3-part Octavious O'Malley series, Harper Collins; and 'Scared of Nothing,' written by Boris Munster. As well, Ben has both written and illustrated the hugely popular 'Who Flung Dung?' and its equally popular sequel 'Cheeky Charlie', Meadowside, UK, which have both been translated into Spanish, Portuguese, and Korean; and are best-sellers in Australia and the UK. Redlich has since illustrated 'Tortoise vs Hare', 'The Rematch', 'Meadowside; The Monkey Pirates', Egmont UK; and 'T-Rex's Terrible Tooth', Koala Books. SELLING POINTS: Hilarious rhyming verse Controversial claim in the cricketing world Zany, whacky cartoon illustrations which will delight children and adults alike

Other Editions - Cowzat! by Bruce Atherton