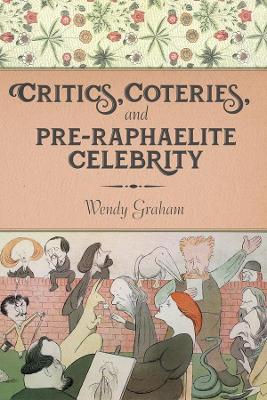 Founded by a band of young iconoclasts, the Pre-Raphaelite Brotherhood stunned Victorian England with its revaluation of culture and lifestyle. With Pre-Raphaelitism ascendant in the 1850s and canonical by the 1880s, the movement's refractory reception history is an object lesson in how avant-gardes burst upon the scene, dispense with their antagonistic posture, and become a mainstay of tradition. Wendy Graham traces the critical discourses that greeted the Pre-Raphaelites' debut, shaped their contemporary reception, and continued to inform responses to them well after their heyday. She explains the mechanics of fame and the politics of scandal contributing to the rise of aestheticism, providing a new interpretation of the place of aesthetic counterculture in Victorian England.

Critics, Coteries, and Pre-Raphaelite Celebrity sheds new light on Victorian discourses on sexuality and masculinity through a thick description of literary bravado, the emotions of male bonding within cliques, and homoerotic frissons among the creators and reviewers of Pre-Raphaelitism. Graham threads together the qualities that made William Holman Hunt, John Everett Millais, and Gabriel Rossetti exemplary figures of aesthetic celebrity in the 1850s; Algernon Swinburne and Simeon Solomon in the 1860s; and Edward Burne-Jones and Walter Pater in the 1870s. The book documents the symbiotic relationship between periodical writers and the artists and poets they helped make famous, demonstrating that the origin myth of Bohemian artistic transcendence was connected with the rise of a professional class of journalists. Graham shows that the Pre-Raphaelites innovated many of the phenomena now associated with Oscar Wilde, arguing that they were foundational for him in forging an artistic and personal identity with a full-blown publicity apparatus. Wilde had models. This book is about them.

A Preview for this title is currently not available.
More Books By Wendy Graham
View All