Critique in a Neoliberal Age

Description - Critique in a Neoliberal Age by Pauline Johnson

Critique in a Neoliberal Age brings a critique of ideology to main debates within economic sociology, populism studies, the neoliberal university, therapy culture, contemporary intimacies and feminism. Over the last decades, neoliberalism has worked to lift social protections and political regulations from the market and to identify modernity with capitalism itself. It has also engaged in an ideological project to screen alternative measurements of progress. Liberal and social democracy have been effectively disabled as grounds for weighing the costs of neoliberal predations. This volume examines the strategies through which neoliberalism has reconstituted and de-politicized liberal precepts such as universal justice, private right and a social democratic project responsive to needs. As such it will appeal to scholars and students of sociology and social and critical theory, political and social philosophy, politics, cultural studies and feminist thought.

Other Editions - Critique in a Neoliberal Age by Pauline Johnson 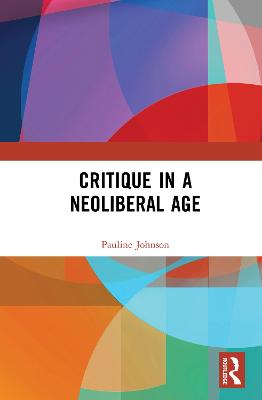 A Preview for this title is currently not available.
More Books By Pauline Johnson
View All

Marxist Aesthetics: The foundations within everyday life for an emancipated consciousness
Pauline Johnson
Paperback , May '12
RRP: $73.99 $73.25