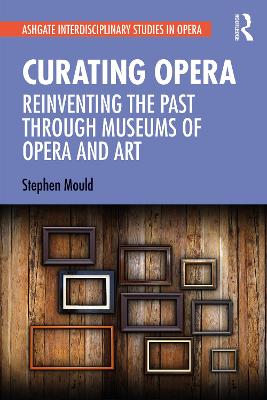 Curating Opera: Reinventing the Past Through Museums of Opera and Art

Description - Curating Opera: Reinventing the Past Through Museums of Opera and Art by Stephen Mould

Curation as a concept and a catchword in modern parlance has, over recent decades, become deeply ingrained in modern culture. The purpose of this study is to explore the curatorial forces at work within the modern opera house and to examine the functionaries and processes that guide them. In turn, comparisons are made with the workings of the traditional art museum, where artworks are studied, preserved, restored, displayed and contextualised - processes which are also present in the opera house. Curatorial roles in each institution are identified and described, and the role of the celebrity art curator is compared with that of the modern stage director, who has acquired previously undreamt-of licence to interrogate operatic works, overlaying them with new concepts and levels of meaning in order to reinvent and redefine the operatic repertoire for contemporary needs. A point of coalescence between the opera house and the art museum is identified, with the transformation, towards the end of the nineteenth century, of the opera house into the operatic museum. Curatorial practices in the opera house are examined, and further communalities and synergies in the way that 'works' are defined in each institution are explored.

This study also considers the so-called 'birth' of opera around the start of the seventeenth century, with reference to the near-contemporary rise of the modern art museum, outlining operatic practice and performance history over the last 400 years in order to identify the curatorial practices that have historically been employed in the maintenance and development of the repertoire. This examination of the forces of curation within the modern opera house will highlight aspects of authenticity, authorial intent, preservation, restoration and historically informed performance practice.

Buy Curating Opera: Reinventing the Past Through Museums of Opera and Art by Stephen Mould from Australia's Online Independent Bookstore, BooksDirect.

A Preview for this title is currently not available.
More Books By Stephen Mould
View All