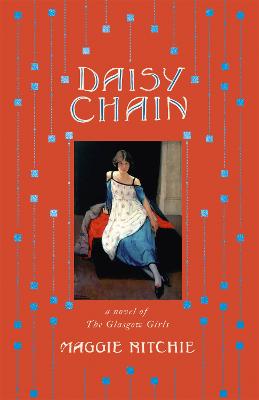 Daisy Chain: a novel of The Glasgow Girls

Description - Daisy Chain: a novel of The Glasgow Girls by Maggie Ritchie

'A wholly delightful novel' Allan Massie, ScotsmanLily Crawford and Jeanie Taylor, from very different backgrounds, are firm friends from their childhoods in Kirkcudbright. They share their ambitions for their futures, Lily to be an artist, Jeanie to be a dancer. The two women's eventful lives are intertwined. In the years before the First World War, the girls lose touch when Jeanie runs away from home and joins a dance company, while Lily attends The Mack, Glasgow's famous school of art designed by Charles Rennie Mackintosh. A chance meeting reunites them and together they discover a Glasgow at the height of its wealth and power as the Second City of the Empire - and a city of poverty and overcrowding. Separated once again after the war, Lily and Jeanie find themselves on opposite sides of the world. Lily follows her husband to Shanghai while Jeanie's dance career brings her international fame. But the glamour and dissolution of 1920s Shanghai finally lead Lily into peril. Her only hope of survival lies with her old friend Jeanie, as the two women turn to desperate measures to free Lily from danger. Inspired by the eventful and colourful lives of the pioneering women artists The Glasgow Girls, particularly that of Eleanor Allen Moore, Daisy Chain is a story of independence, women's art, resilience and female friendship, set against the turbulent background of the early years of the 20th century.

A Preview for this title is currently not available.
More Books By Maggie Ritchie
View All