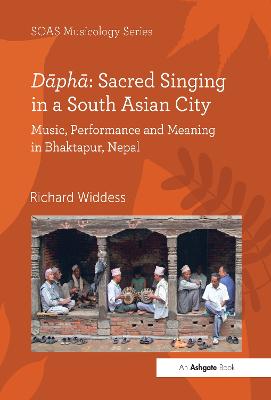 Dapha, or dapha bhajan, is a genre of Hindu-Buddhist devotional singing, performed by male, non-professional musicians of the farmer and other castes belonging to the Newar ethnic group, in the towns and villages of the Kathmandu Valley, Nepal. The songs, their texts, and their characteristic responsorial performance-style represent an extension of pan-South Asian traditions of raga- and tala-based devotional song, but at the same time embody distinctive characteristics of Newar culture. This culture is of unique importance as an urban South Asian society in which many traditional models survive into the modern age.

There are few book-length studies of non-classical vocal music in South Asia, and none of dapha. Richard Widdess describes the music and musical practices of dapha, accounts for their historical origins and later transformations, investigates links with other South Asian traditions, and describes a cultural world in which music is an integral part of everyday social and religious life. The book focusses particularly on the musical system and structures of dapha, but aims to integrate their analysis with that of the cultural and historical context of the music, in order to address the question of what music means in a traditional South Asian society.

A Preview for this title is currently not available.
More Books By Richard Widdess
View All