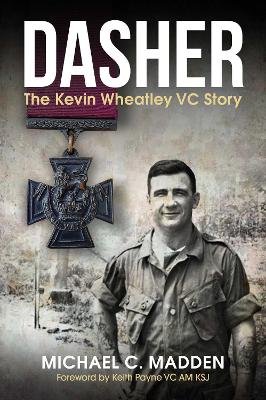 Kevin 'Dasher' Wheatley VC is one of the most extraordinary characters in Australian history. Dasher was a husband, father, champion footballer and one of the finest soldiers this country has ever produced. The story of his sacrifice is used by the ADF as a perfect example of valour and mateship to this day. Although he is one of the most famous Victoria Cross recipients of all time, his story has never been fully told. Until now.

Dasher: The Kevin Wheatley VC Story was written with first-hand accounts from Dasher's family and the men who served and fought alongside him. It tells not only the story of an unlikely lad from the mean streets of Sydney, but that of a soldier whose death devastated the ranks of three armies and changed the way Australia dealt with the overseas loss of service people forever. Everyone who met the man has a Dasher Wheatley story of larrikin behaviour, outstanding soldiering, stunning valour, or all three.

Forwarded by Keith Payne VC and featuring the 2021 investiture of Dasher's American Silver Star, an award 56 years in the making, this book also investigates other gallantry awards Wheatley qualified for but was never given.

A Preview for this title is currently not available.
More Books By Michael C. Madden
View All