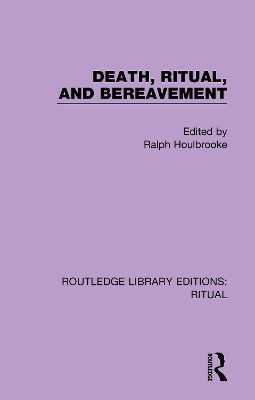 Originally published in 1989, Death, Ritual and Bereavement examines the social history of death and dying from 1500 to the 1930s. This edited collection focuses on the death-bed, funerals, burials, mourning customs, and the expression of grief. The essays throw fresh light on developments which lie at the roots of present-day tendencies to minimize or conceal the most unpleasant aspects of death, among them the growing participation of doctors in the management of death-beds in the eighteenth century and the creation of extra-mural cemeteries, followed by the introduction of cremation in the nineteenth century. The volume also underlines the importance of religious belief, in helping the bereaved in past times. The book will appeal to students and academics of family and social history as well as history of medicine, religion and anthropology.

A Preview for this title is currently not available.
More Books By Ralph Houlbrooke
View All