Bodies mangled, limbs broken, skin flayed, blood spilled: from paintings to prints to small sculptures, the art of the late Middle Ages and early modern period gave rise to disturbing scenes of violence. Many of these torture scenes recall Christ's Passion and its aftermath, but the martyrdoms of saints, stories of justice visited on the wicked, and broadsheet reports of the atrocities of war provided fertile ground for scenes of the body's desecration. Contributors to this volume interpret pain, suffering, and the desecration of the human form not simply as the passing fancies of a cadre of proto-sadists, but also as serving larger social functions within European society. Taking advantage of the frameworks established by scholars such as Samuel Edgerton, Mitchell Merback, and Elaine Scarry (to name but a few), Death, Torture and the Broken Body in European Art, 1300-1650 provides an intriguing set of lenses through which to view such imagery and locate it within its wider social, political, and devotional contexts. Though the art works discussed are centuries old, the topics of the essays resonate today as twenty-first-century Western society is still absorbed in thorny debates about the ethics and consequences of the use of force, coercion (including torture), and execution, and about whether it is ever fully acceptable to write social norms on the bodies of those who will not conform. 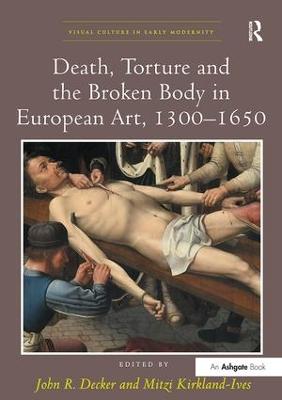 A Preview for this title is currently not available.
More Books By John R. Decker
View All