The concept of the neoliberal city has become a key structuring analytical framework in the field of urban studies. It explains both the ongoing transformation of urban policies and the socio-spatial effects of these policies within cities and highlights the prominent role of cities in the new geography of capitalism.

Bringing together a team of leading scholars, this book challenges the neoliberal city thesis. It argues that the definition of neoliberalization may be more complex than it seems, resulting in over-simplified explanations of some processes, such as the rise of metropolitan governments or the importance given to urban economic development policies or gentrification. As a structuralist and macro-level theory, the "neoliberal city" does not shed light upon micro-level processes or identify and analyze actors' logics and practices. Finally, the concept is profoundly influenced by the historical trajectories of the United Kingdom and the United States, and the generalization of this experience to other contexts often leads to a kind of academic ethnocentrism.

This book argues that, on its own, the current conceptualizations of neoliberalization are insufficient. Instead, it should be analyzed alongside other transformative processes in order to provide an analytical framework to explain the variety of processes of change, motivations and justifications too easily labelled as urban neoliberalism. This unique and critical contribution will be essential reading for students and scholars alike working in Human Geography, Urban Studies, Economics, Sociology and Public Policy.

Other Editions - Debating the Neoliberal City by Gilles Pinson 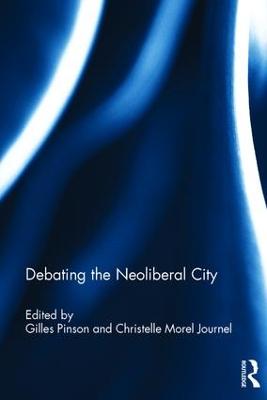 A Preview for this title is currently not available.
More Books By Gilles Pinson
View All