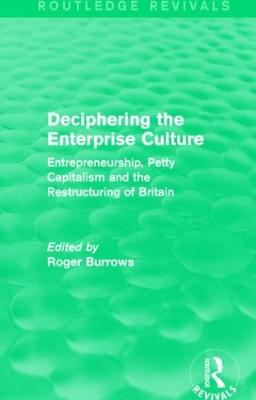 Entrepreneurship, Petty Capitalism and the Restructuring of Britain

The idea of the 'enterprise culture' has been much vaunted over the last few decades: the growth of self-employment and small business ownership has been an important feature of the restructuring of the British economy. Because it is a concept that is difficult to evaluate, controversial and politically sensitive, social scientists were slow to analyse it. Consequently, it had been caricatured and many questions about its impact on society and the economy had been left unanswered.

This collection, which was first published in 1991, presents a critical analysis of the various manifestations of the enterprise culture. Drawing upon a range of research, it deals with a number of related topics. The result is a powerful analysis of the material and ideological role of the petty bourgeoisie in contemporary capitalism.

Its multidisciplinary approach, which contributions from leading scholars in the field, makes this book of interest to anyone wanting to make sense of the socio-economic restructuring of Britain.

Other Editions - Deciphering the Enterprise Culture by Roger Burrows 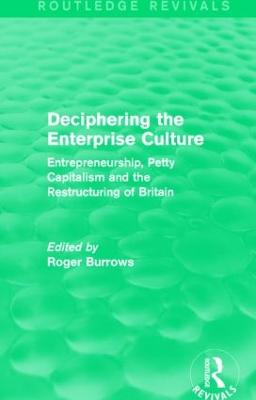 A Preview for this title is currently not available.
More Books By Roger Burrows
View All