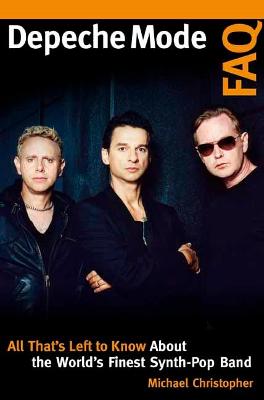 The preeminent synth-pop outfit for four decades, Depeche Mode have endured an ever-shifting musical landscape, rising above fads and battles with personal demons, somehow managing to retain a hold on the charts and the audience, the latter which continues to grow as new generations discover them and become "devotees."

Depeche Mode FAQ: All That's Left to Know About the World's Finest Synth-Pop Band shows how a group of schoolmates influenced by the likes of Kraftwerk, Joy Division, and mid-period David Bowie carved out their own musical niche until they became one of the most influential bands to come out of England. Depeche Mode were Europe's best-kept secret in the early '80s with the albums Construction Time Again and the-perhaps-tongue-in-cheek-titled Music for the Masses. They became a worldwide phenomenon as the '90s dawned, with the landmark LP Violator, containing the smash hits "Personal Jesus," "Enjoy the Silence," and "Policy of Truth."

But success came at a price as depression, alcoholism, drug addiction, and personnel departures threatened to derail the band. It wasn't a question of whether the music of Depeche Mode would be able to withstand fickle industry changes, but rather if the members of the group themselves could make it out alive. Depeche Mode FAQ shows how they did, becoming legends in the process.

A Preview for this title is currently not available.
More Books By Michael Christopher
View All