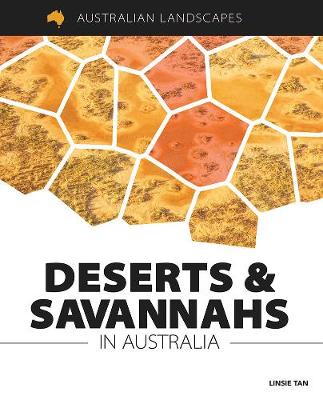 Deserts and Savannahs In Australia

Description - Deserts and Savannahs In Australia by Rachel Dixon

The immense desert areas of Australia used to be called its 'dead heart'. Today we realise that deserts and savannahs have complex ecosystems with plants and animals that have adaptations enabling them to survive there and not in any other location. Deserts are now iconic symbols of Australia and are no longer dismissed as useless empty wastelands. Although colonial explorers found the deserts harsh and unforgiving Indigenous Australians learned how to live in the deserts find water and prosper. Learn about each of Australia's ten largest deserts and also find out why the Nullarbor Plain is different from all of them.

Australia is an ancient country with landscapes that range from snowy alps to red deserts. The plants and animals in Australia's landscapes include rare and unique species some of which are descendants of the wildlife that flourished on Gondwana the prehistoric continent that existed long before Australia separated and moved across the globe to its present location. Read about the sustainability issues that affect Australia's natural environments and what is being done to preserve them for the future. Discover the geography and history of each of Australia's magnificent landscapes and investigate their importance to the Indigenous Australians who have lived in them for thousands of years.

Other Editions - Deserts and Savannahs In Australia by Rachel Dixon