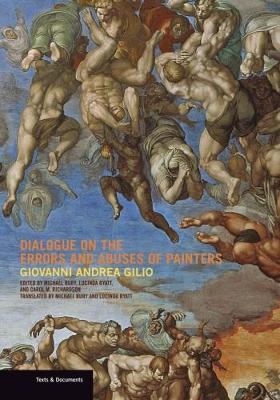 Dialogue on the Errors and Abuses of Painters

Giovanni Andrea Gilio's Dialogue on the Errors and Abuses of Painters (1564) is one of the first treatises on art published in the post-Tridentine period. It remains a key primary source for the discussion of the reform of art as it unfolded at the time of the Council of Trent and the Catholic Reformation.

Relatively little is known about Gilio himself, a cleric from Fabriano, Italy. He was evidently familiar with Cardinal Alessandro Farnese's lively court circle in Rome and dedicated his book to the cardinal. His text-available here in English in full for the first time-takes the form of a spirited dialogue among six protagonists, using the voices of each to present different points of view. Through their dialogue Gilio grapples with a host of issues, from the relationship between poetry and painting, to the function of religious images, to the effects such images have on viewers. The primary focus is the proper representation of history, and Michelangelo's Last Judgment fresco in the Sistine Chapel is the exemplary case. Indeed, Michelangelo's painting is both praised and condemned as an example of the possibilities and limits of art. Although Gilio's dialogue is often quoted by art historians to point out the more controlling view of art and artists by the Roman Catholic Church, the unabridged text reveals the nuanced and provisional debates happening during this critical era.


Buy Dialogue on the Errors and Abuses of Painters by Givanni Andrea Gilio from Australia's Online Independent Bookstore, BooksDirect.