Dialogues on the Ethics of Abortion

Description - Dialogues on the Ethics of Abortion by Bertha Alvarez Manninen

What happens when two intelligent and highly informed fictional college students, one strongly pro-choice and the other vigorously pro-life, are asked to put together a presentation on abortion? Their conversations over five days - friendly but lively, charitable but clear - are captured in this book.

Through these dialogues, students and other interested readers are introduced to the difficult moral issues of abortion. In Chapter 1, readers learn about Roe v. Wade and other relevant legal cases. Chapter 2 covers basic, philosophical issues such as: What is a person? Are fetuses persons? Is fetal potential morally relevant? How shall we define the moral community? Chapter 3 introduces students to Don Marquis's "Why Abortion is Immoral" and also the metaphysical issues of personal identity and its relevance to abortion. Chapter 4 covers Judith Jarvis Thomson's "A Defense of Abortion", including objections and responses to the argument from bodily autonomy. Finally, Chapter 5 looks at abortion in hard cases, such as in cases of rape, fetal disability, non-viable pregnancies, and sex-selection; the chapter also includes a conversation on fathers and abortion.

With a Foreword by Laurie Shrage, topics headings in the margins, and an annotated bibliography, Dialogues on the Ethics of Abortion is an easy-to-use volume and valuable resource for anyone interested in a fair and clear-headed approach to one of the most contentious moral issues of our time. 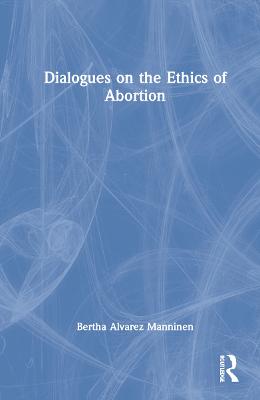 A Preview for this title is currently not available.
More Books By Bertha Alvarez Manninen
View All