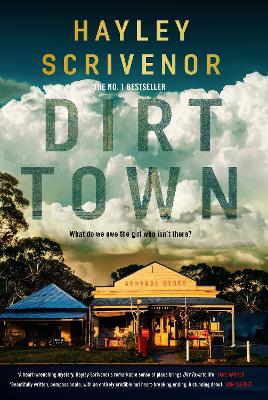 My best friend wore her name, Esther, like a queen wearing her crown at a jaunty angle. We were twelve years old when she went missing.

On a sweltering Friday afternoon in Durton, best friends Ronnie and Esther leave school together. Esther never makes it home.

Ronnie's going to find her, she has a plan. Lewis will help. Their friend can't be gone, Ronnie won't believe it.

Detective Sergeant Sarah Michaels can believe it. She has seen what people are capable of. She knows more than anyone how, in a moment of weakness, a person can be driven to do something they never thought possible.

Lewis can believe it too. But he can't reveal what he saw that afternoon at the creek without exposing his own secret.

What do we owe the girl who isn't there?

Character-rich and propulsive, with a breathtakingly original use of voice and revolving points of view, Dirt Town delves under the surface, where no one can hide. With emotional depth and sensitivity, this stunning debut shows us how much each person matters in a community that is at once falling apart and coming together.

Esther will always be a Dirt Town child, as we are its children, still.

'You will not be able to put it down.' Hannah Kent

'Dirt Town is a remarkable debut, Hayley Scrivenor masterful in her deft handling of the tensions underpinning a small, regional town, and the complex characters that populate it. You will not be able to put it down.' - Hannah Kent

'I loved this. What wonderful writing. Scarily good! . . . Masterful. Australian crime has a new star. The characters of Dirt Town are rich, raw and beautifully realised. One of the crime books of the year. Intelligent, nuanced and compassionate.' - Chris Hammer