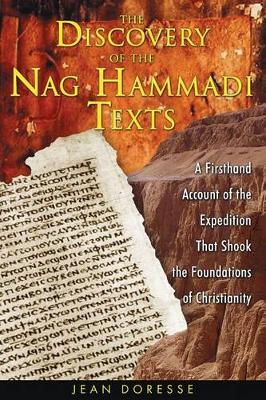 The Discovery of the Nag Hammadi Texts

Description - The Discovery of the Nag Hammadi Texts by Jean Doresse

Details the momentous discovery and significance of the ancient gnostic texts hidden for sixteen centuries in Chenoboskion, Egypt

* Includes the first translation of the Gospel of Thomas, with full commentary

Hidden for sixteen centuries, the Nag Hammadi library, the most prodigious collection of sacred gnostic texts, were discovered in the late 1940s in Chenoboskion, a remote hamlet in upper Egypt. Among them was the Gospel according to Thomas, which aroused international publicity and alerted the world to the significance of this archeological find, believed by many scholars to surpass the Dead Sea Scrolls in importance.

The Discovery of the Nag Hammadi Texts is the original survey of the contents of these documents and their significance to the world at large. Doresse's narrative allows readers direct contact with an ancient form of Christianity through the philosophical wealth of the texts-ranging from gnostic revelations and Christian apocrypha to Hermetic literature-Included in the book is the original English translation of the Gospel of Thomas first published in 1960.