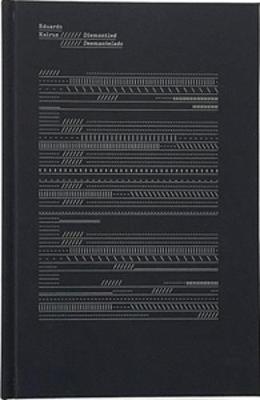 Eduardo Kairuz is a rare kind of design professional whose work emerges equally from the worlds of both architecture and art. Not merely an accommodation between two different disciplines, it moves fluidly between the hierarchical structures of both built and visual environments.

Having studied architecture at Universidad Central de Venezuela, Kairuz worked for a time as an architect on a rehabilitation project in one of the most violent slums in the southern hemisphere: Barrio San Miguel de La Vega. That experience, along with wider observations of crisis, conflict and dislocation in Latin America and elsewhere, has informed Kairuz's research and creative practice, exploring the disrupting effects of such conditions on architecture and the city. His work has been exhibited throughout Australia, Asia, Europe, the United States and South America, with this book specifically following in the wake of the exhibitions Dismantled at Centro Cultural Chacao (Caracas, 2014) and Variations at The Substation (Melbourne, 2012).

In this work, Kairuz reads the conventions of classical music (its strict discipline and the authority of the maestro) as analogous to wider systems of visual and spatial order. He then systematically dismantles these conventions, through the editing and recomposing of their elements, to the point of collapse. The work is driven by a fascination with `the mounting tensions that build up just before collapse, as well as the resilience that emerges right after the disaster erupts and falls into consciousness.'

The book is also a unique collaboration with the multi-award winning, multidisciplinary designer John Warwicker. Bringing both a lifetime of experience and a protean capacity to approach each new challenge afresh, Warwicker's design typographically echoes the tension within Kairuz's work, between control and dissonance, between discipline and restless enquiry.

A Preview for this title is currently not available.
More Books By Dieter Buchhart
View All