Dominican Women and Renaissance Art: The Convent of San Domenico of Pisa

Description - Dominican Women and Renaissance Art: The Convent of San Domenico of Pisa by Ann Roberts

Starting from an inventory and other documents, Ann Roberts has identified some 30 works of art that originated from the convent of San Domenico of Pisa. She here examines those objects commissioned for and made by the nuns during the fifteenth century; some of the objects included have never before been published. One of her goals in this study is to bring into the discussion of Renaissance art a body of images that have been previously overlooked, because they come from a non-Florentine context and because they do not fit modern notions of the "development" of Renaissance style. She also analyzes the function of the images - social as well as religious - within the context of a female Dominican convent. Finally, she offers descriptions of and documentation for the process of patronage as it was practiced by cloistered women, and the making of art in such enclosures. The author presents a catalogue of works, which gives basic data and bibliography for the objects described in the text. Roberts offers other valuable resources in the appendices, including unpublished C19th inventories of the objects in the convent at various moments, documents regarding the commission of works of art for the convent, letters written by the nuns, a list of the Prioresses of San Domenico, lists of nuns at different points in the fifteenth and early sixteenth century, and a list of the relics owned by the convent in the sixteenth century. Roberts firmly grounds her interpretation in the values of the Order to which the nuns belonged, and in the political and social concerns of their city.

Other Editions - Dominican Women and Renaissance Art: The Convent of San Domenico of Pisa by Ann Roberts 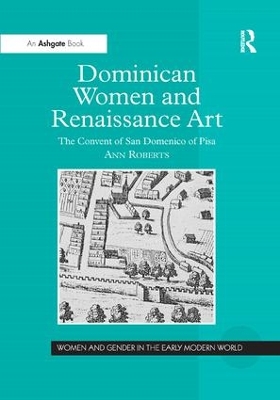 A Preview for this title is currently not available.
More Books By Ann Roberts
View All