Drama in Medieval and Early Modern Europe: Playmakers and their Strategies

Drama in Medieval and Early Modern Europe moves away from the customary conceptual framework that artificially separates 'medieval' from 'early modern' drama to explore the role of drama and spectacle in England, France, the Low Countries, Spain, Italy, Switzerland, and the German-speaking areas that now constitute Austria and Germany.

This book investigates the ranges of dramatic and performative techniques and strategies that playmakers across Europe used to adapt their work to the changing contexts in which they performed, and to the changing or expanding audiences that they faced. It considers the different views expressed through drama and spectacle on shared historical events, how communities coped with similar issues and why they ritually recycled these themes through reinvented or alternative forms that replaced or existed alongside their predecessors. A wide variety of genres of play are discussed throughout, including visitatio sepulchri (visit to the tomb) plays; Easter and Passion plays and morality plays; the French civic mystere; Italian sacre rappresentazioni performed by choirboys in the context of the church; Burgertheater from the Swiss Confederacy; drama performed for the purpose of royal entertainment and propaganda; May and summer games; and the commercial, professional theatre of Shakespeare and Lope de Vega.

Examining the strength of drama in relation to the larger cultural forces to which it adapted, and demonstrating the use of social, political, economic, and artistic networks to educate and support the social structures of communities, Drama in Medieval and Early Modern Europe offers a broader understanding of a shared European past across the traditional chronological divide of 1500. It is ideal for students of social history, and the history of medieval and early modern drama or literature.

Other Editions - Drama in Medieval and Early Modern Europe: Playmakers and their Strategies by Nadia Therese van Pelt 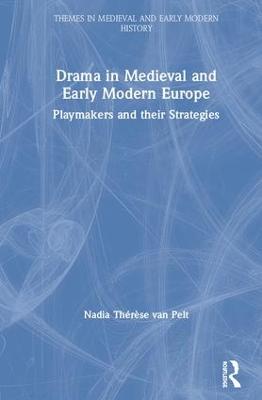 A Preview for this title is currently not available.
More Books By Nadia Therese van Pelt
View All