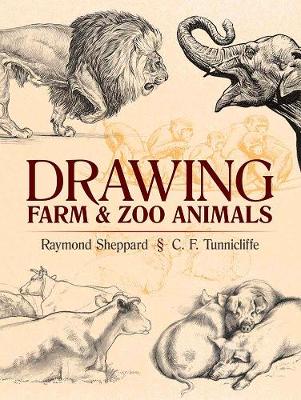 For the first time in a single-volume edition, this guide combines the works of two of Britain's leading 20th-century illustrators of animals, Raymond Sheppard's Drawing at the Zoo and Charles Tunnicliffe's How to Draw Farm Animals. Artists of all skill levels will benefit from the book's tremendous variety of domestic and wild animal studies, each accompanied by helpful pointers. Even the smallest of zoos offers models with an abundant variety of shapes and patterns. It's not always easy to capture animals in motion, so in Drawing at the Zoo, Raymond Sheppard proposes starting with sleeping creatures and the less excitable types to help overcome the practical difficulties. Other suggestions include what not to do, notes on distinctive animal characteristics, and a survey of basic shapes, all illustrated by the author's own work. Charles F. Tunnicliffe, author of How to Draw Farm Animals, grew up on a farm and drew and painted animals all his life. In addition to dozens of fascinating examples of his sketches, his book includes informative comments on farm life that provide essential tips for the realistic portrayals of horses, cattle, pigs, and sheep as well as the farmer's dog and the farmyard cat. AUTHORS: British illustrator Raymond Sheppard (1913 1958) was celebrated for his drawings of nature and animals for books and magazines. He published three art instructional books with Studio Publications and is perhaps best remembered for a 1952 edition of The Old Man and the Sea, which he co-illustrated with Charles Tunnicliffe. British naturalist painter Charles Tunnicliffe (1901 1979) was raised on a farm in rural England. His long and prolific career encompassed illustrations for more than 250 books, and he is noted for his depictions of birds and animals in their natural habitats. Tunnicliffe was actively involved in the Royal Society for the Protection of Birds.