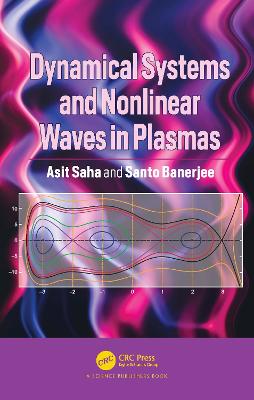 Dynamical systems and Nonlinear Waves in Plasmas is written in a clear and comprehensible style to serve as a compact volume for advanced postgraduate students and researchers working in the areas of Applied Physics, Applied Mathematics, Dynamical Systems, Nonlinear waves in Plasmas or other nonlinear media.

It provides an introduction to the background of dynamical systems, waves, oscillations and plasmas. Basic concepts of dynamical systems and phase plane analysis for the study of dynamical properties of nonlinear waves in plasmas are presented. Different kinds of waves in plasmas are introduced. Reductive perturbative technique and its applications to derive different kinds of nonlinear evolution equations in plasmas are discussed. Analytical wave solutions of these nonlinear evolution equations are presented using the concept of bifurcation theory of planar dynamical systems in a very simple way. Bifurcations of both small and arbitrary amplitudes of various nonlinear acoustic waves in plasmas are presented using phase plots and time-series plots. Super nonlinear waves and its bifurcation behaviour are discussed for various plasma systems. Multiperiodic, quasiperiodic and chaotic motions of nonlinear plasma waves are discussed in presence of external periodic force. Multistability of plasma waves is investigated. Stable oscillation of plasma waves is also presented in dissipative plasmas.

The book is meant for undergraduate and postgraduate students studying plasma physics. It will also serve a reference to the researchers, scientists and faculties to pursue the dynamics of nonlinear waves and its properties in plasmas. It describes the concept of dynamical systems and is useful in understanding exciting features, such as solitary wave, periodic wave, supernonlinear wave, chaotic, quasiperiodic and coexisting structures of nonlinear waves in plasmas. The concepts and approaches, discussed in the book, will also help the students and professionals to study such features in other nonlinear media.

A Preview for this title is currently not available.
More Books By Santo Banerjee
View All