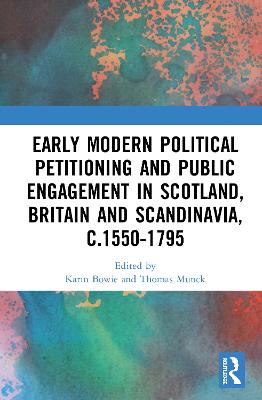 This book assesses the everyday use of petitions in administrative and judicial settings and contrasts these with more assertive forms of political petitioning addressed to assemblies or rulers.

A petition used to be a humble means of asking a favour, but in the early modern period, petitioning became more assertive and participative. This book shows how this contrasted to ordinary petitioning, often to the consternation of authorities. By evaluating petitioning practices in Scotland, England and Denmark, the book traces the boundaries between ordinary and adversarial petitioning and shows how non-elites could become involved in politics through petitioning. Also observed are the responses of authorities to participative petitions, including the suppression or forgetting of unwelcome petitions and consequent struggles to establish petitioning as a right rather than a privilege. Together the chapters in this book indicate the significance of collective petitioning in articulating early modern public opinion and shaping contemporary ideas about opinion at large.

The chapters in this book were originally published in the journal Parliaments, Estates & Representation.

A Preview for this title is currently not available.
More Books By Karin Bowie
View All