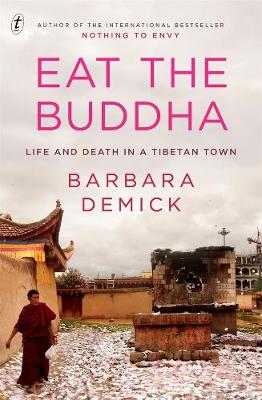 Eat the Buddha: Life and Death in a Tibetan Town

Description - Eat the Buddha: Life and Death in a Tibetan Town by Barbara Demick

An unprecedented exploration of contemporary Tibet, one of the world's most inaccessible places, geographically and politically, and one of its most misunderstood.

For centuries, Tibet was known as a hermit kingdom. Its charms were hidden by the natural barrier of the Himalayas to its west and by a reclusive theocratic government ruled by a succession of Dalai Lamas...Nowadays it is not the Tibetans shutting the door, but a paranoid Chinese Communist Party. China has ruled Tibet since 1950, and is a most unwelcoming gatekeeper.

In Eat the Buddha, Barbara Demick, award-winning author of Nothing to Envy, journeys to a small town high on the eastern edge of the Tibetan plateau. The residents of Aba have been in an uneasy compromise with the Chinese for decades, living nomadically on the plateau in the summer and moving to concrete housing in the winter, sending their children to monasteries to be educated, practising polyandry as is their custom-yet all the time subject to oppressive restrictions.

Travelling in disguise to evade the Chinese authorities, Demick interviewed Tibetans over three years- among them a novice monk contemplating protest suicide, the last princess of the region exiled during the Cultural Revolution and a young woman trapped in a bigamous marriage.

Weaving together their stories with the history of China's dominance over Tibet, she creates a vivid portrait of the lives of a people locked in a struggle for identity and independence.

Buy Eat the Buddha: Life and Death in a Tibetan Town by Barbara Demick from Australia's Online Independent Bookstore, BooksDirect.

A Preview for this title is currently not available.
More Books By Barbara Demick
View All