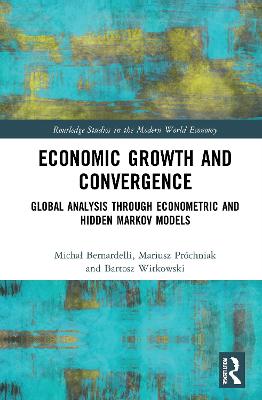 There are many different types of convergence within economics, as well as several methods to analyse each of them. This book addresses the concept of real economic convergence or the gradual levelling-off of GDP (gross domestic product) per capita rates across economies.

In addition to a detailed, holistic overview of the history and theory, the authors include a description of two modern methods of assessing the occurrence and rate of convergence, BMA-based and HMM-based, as well as the results of the empirical analysis. Readers will have access not only to the conventional econometric approach of convergence but also to an alternative one, allowing for the convergence issue to be expressed in the context of automatic pattern recognition. This approach is universal as it can be adapted to a variety of input data. The lowest aggregation level study investigates regional convergence through the case of Polish voivodships, where convergence towards the leader is tested. On a higher level of aggregation, the authors examine the existence of GDP convergence in such groups as the EU28, North Africa and the Middle East, sub-Saharan Africa, South America, Caribbean, South-East Asia, Australia and Oceania, or post-socialist countries. For each group, the real convergence is tested using the two above-mentioned approaches. The results are widely discussed, broadly illustrated, interpreted, and compared. The analysis allows readers to draw interesting conclusions about the causes of convergence or the drivers behind divergence. The book will stimulate further research in the field, but the research was conducted from the point of view of individual countries.