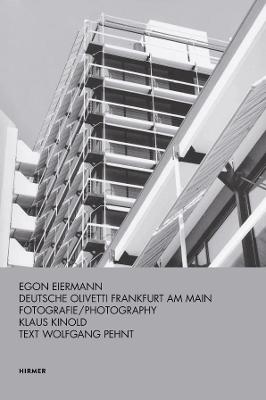 The ensemble with its prominent twin towers that Egon Eiermann (1904-1970) built in Frankfurt am Main for the Italian office machinery company Olivetti, was the Karlsruhe architect's last major project. His priorities lay in the slender form, derived from the task, the construction and the material to create a characteristic silhouette.

Adriano Olivetti, the son of the company's founder, valued not only the firm's products, which became cult objects of Italianita in the field of design and which established the 'Stile Olivetti'. He also made the same demands regarding quality in architecture. The grandson, Roberto Olivetti, commissioned Eiermann, a famous representative of German postwar Modernism, to design the German branch offices. For the architect the project formed the culmination of his career, while for the Karlsruhe student Klaus Kinold it marked the beginning of a career as a photo g-rapher of architecture. He maintained that he had learned more for his future profession from his teacher Egon Eiermann than from anyone else.

A Preview for this title is currently not available.
More Books By Klaus Kinold
View All