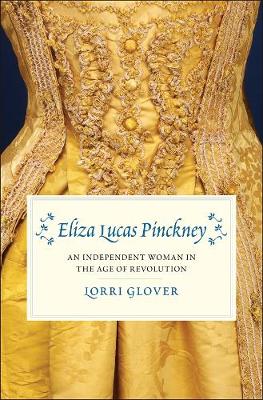 Eliza Lucas Pinckney: An Independent Woman in the Age of Revolution

Description - Eliza Lucas Pinckney: An Independent Woman in the Age of Revolution by Lorri Glover

The enthralling story of Eliza Lucas Pinckney, an innovative, highly regarded, and successful woman plantation owner during the Revolutionary era

Eliza Lucas Pinckney (1722-1793) reshaped the colonial South Carolina economy with her innovations in indigo production and became one of the wealthiest and most respected women in a world dominated by men. Born on the Caribbean island of Antigua, she spent her youth in England before settling in the American South and enriching herself through the successful management of plantations dependent on enslaved laborers. Tracing her extraordinary journey and drawing on the vast written records she left behind-including family and business letters, spiritual musings, elaborate recipes, macabre medical treatments, and astute observations about her world and herself-this engaging biography offers a rare woman's first-person perspective into the tumultuous years leading up to and through the Revolutionary War and unsettles many common assumptions regarding the place and power of women in the eighteenth century.

A Preview for this title is currently not available.
More Books By Lorri Glover
View All