Originally published in 1991. Focusing on 'boys' own' literature, this book examines the reasons why such a distinct type of combative masculinity developed during the heyday of the British Empire. This book reveals the motives that produced this obsessive focus on boyhood. In Victorian Britain many kinds of writing, from the popular juvenile weeklies to parliamentary reports, celebrated boys of all classes as the heroes of their day. Fighting fit, morally upright, and proudly patriotic - these adventurous young men were set forth on imperial missions, civilizing a savage world. Such noble heroes included the strapping lads who brought an end to cannibalism on Ballantyne's "Coral Island" who came into their own in the highly respectable "Boys' Own Paper", and who eventually grew up into the men of Haggard's romances, advancing into the Dark Continent. The author here demonstrates why these young heroes have enjoyed a lasting appeal to readers of children's classics by Stevenson, Kipling and Henty, among many others. He shows why the political intent of many of these stories has been obscured by traditional literary criticism, a form of criticism itself moulded by ideals of empire and 'Englishness'. Throughout, imperial boyhood is related to wide-ranging debates about culture, literacy, realism and romance. This is a book of interest to students of literature, social history and education.

Other Editions - Empire Boys: Adventures in a Man's World by Joseph Bristow 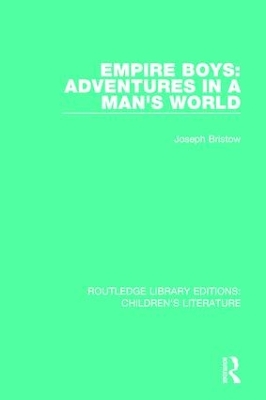 A Preview for this title is currently not available.
More Books By Joseph Bristow
View All