The Encyclopedia of Social Theory contains over 500 entries varying from concise definitions of key terms and short biographies of key theorists to comprehensive surveys of leading concepts, debates, themes and schools. The object of the Encyclopedia has been to give thorough coverage of the central topics in theoretical sociology as well as terms and concepts in the methodology and philosophy of social science. Although 106 theorists are given entries, the emphasis of the work is on the elucidation of ideas rather than intellectual biography. The Encyclopedia covers the leading contemporary domains of debate on social theory and the classical legacies of social thinkers from the nineteenth and early twentieth centuries, giving proper balance to both the European and North American traditions and to important new developments in the global self-understanding of sociology.

Social theory has become one of the most vigorous specialisms of sociology in recent years. This is in part due to the considerable overlaps of social theory with other disciplinary areas, such as cultural and media studies, anthropology, and political theory, and to the cross-disciplinary nature of theoretical approaches such as feminism and psychoanalysis, and new fields such as postcolonial studies. The editors have therefore worked to produce in the Encyclopedia of Social Theory a first-call reference for students and researchers across the social sciences and humanities with an interest in contemporary theory and the modern history of ideas.

The Encyclopedia has been authored by leading international specialists in the field under the direction of a well-balanced editorial team. It is comprehensively cross-referenced and all larger entries carry bibliographies. There is a full index.

Other Editions - Encyclopedia of Social Theory by Austin Harrington 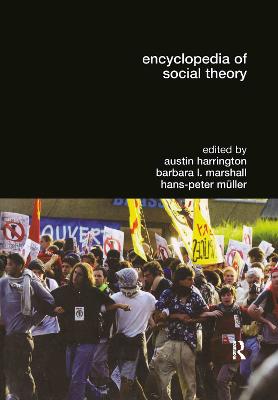 A Preview for this title is currently not available.
More Books By Austin Harrington
View All