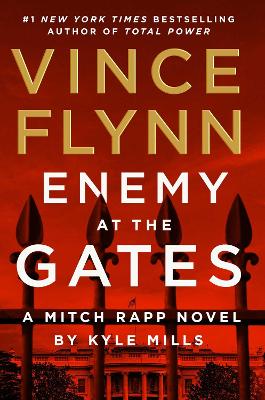 Enemy at the Gates

Description - Enemy at the Gates by Vince Flynn

America is reeling from the national blackout that swept the nation, continuing to dig out of the power outage. And the new president is unlike any Mitch has worked with in the past; he is extremely dictatorial and sees cracks in America's democratic institutions that he believes can be exploited to put his family in power permanently.

As Mitch backs away from the new president, he, in turn, questions Rapp's loyalty. Mitch decides to take a much needed break and moves to his house in Cape Town, where he gets pulled into a job with Nicholas Ward, the world's first trillionaire. It has been discovered that there is a mole in the CIA who's been digging through their systems for information on Ward so, after thwarting an attempt to kidnap him Uganda, Mitch makes it look like the abduction was successful. The hope is that this will give Rapp the freedom to track down the person who has been able to gain such deep access into the CIA's mainframe.

Rapp, completely cut off from the agency, must uncover the identity of the mole and deal with him. But the situation is deeper and more complex than he ever could have imagined, involving the President of the United States himself.

Praise for the Mitch Rapp series
'Sizzles with inside information and CIA secrets' Dan Brown
'A cracking, uncompromising yarn that literally takes no prisoners' The Times
'Vince Flynn clearly has one eye on Lee Child's action thriller throne with this twist-laden story. . . instantly gripping' Shortlist
'Action-packed, in-your-face, adrenalin-pumped super-hero macho escapist fiction that does exactly what it says on the label' Irish Independent
'Mitch Rapp is a great character who always leaves the bad guys either very sorry for themselves or very dead' Guardian
'Outstanding . . . Mills is writing at the top of his game' Publishers Weekly

A Preview for this title is currently not available.
More Books By Vince Flynn
View All