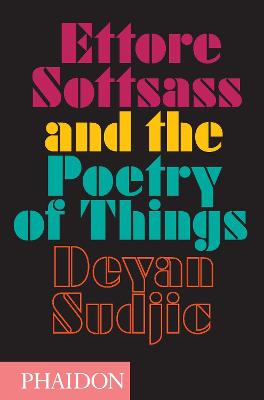 Ettore Sottsass and the Poetry of Things

Description - Ettore Sottsass and the Poetry of Things by Deyan Sudjic

This book tells the story of Italian designer and architect Ettore Sottsass (1917-2007), not just revealing the anecdotes and inspirations behind many of his most famous pieces but also detailing his encounters with some of the most iconic figures of the 20th century, such as Picasso, Hemingway and Allen Ginsberg.Perhaps best known as the founder of the Memphis Group in the 1980s - famous for its colourful and flamboyant furniture, ceramics and lighting pieces - Ettore Sottsass was one of the most important and prolific Italian designers of the 20th century and is celebrated internationally for his contribution to architecture, industrial and furniture design, ceramics, graphic design, and photography. He initially trained as an architect, before going on to become design consultant for Olivetti, where he designed the Valentine typewriter, one of his most iconic pieces. Throughout his long career, which spanned many disciplines, he traveled extensively, taking thousands of photographs of the things that inspired him.This book - written by Deyan Sudjic - explores the entire life of this incredible designer, placing it in historical context, and covering everything from Sottsass's birth in 1917 to his death in 2007. It also includes approximately 100 carefully selected, and previously unpublished images from the Ettore Sottsass Archives in Milan, to illustrate the

A Preview for this title is currently not available.
More Books By Deyan Sudjic
View All