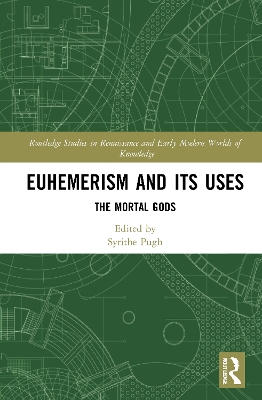 Euhemerism and Its Uses: The Mortal Gods

Description - Euhemerism and Its Uses: The Mortal Gods by Syrithe Pugh

Euhemerism and Its Uses offers the first interdisciplinary, focussed, and all-round view of the long history of an important but understudied phenomenon in European intellectual and cultural history.

Euhemerism - the claim that the Greek gods were historically mortal men and women - originated in the early third century BCE, in an enigmatic and now fragmentary text by the otherwise unknown author Euhemeros. This work, the Sacred Inscription, has been read variously as a theory of religion, an atheist's manifesto, as justifying or satirizing ruler-worship, as a fantasy travel-narrative, and as an early 'utopia'. Influencing Hellenistic and Roman literature and religious and political thought, and appropriated by early Christians to debunk polytheism while simultaneously justifying the continued study of classical literature, euhemerism was widespread in the middle ages and Renaissance, and its reverberations continue to be felt in modern myth-theory. Yet, though frequently invoked as a powerful and pervasive tradition across several disciplines, it is still under-examined and poorly understood.

Filling an important gap in the history of ideas, this volume will appeal to scholars and students of classical reception, mediaeval and Renaissance literature, historiography, and theories of myth and religion.

A Preview for this title is currently not available.
More Books By Syrithe Pugh
View All