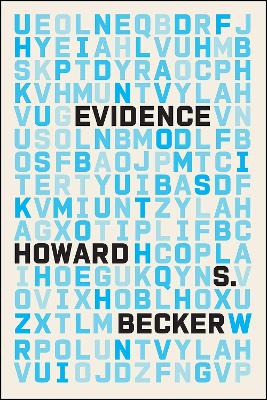 Howard S. Becker is a master of his discipline. His reputation as a teacher, as well as a sociologist, is supported by his best-selling quartet of sociological guidebooks: Writing for Social Scientists, Tricks of the Trade, Telling About Society, and What About Mozart? What About Murder? It turns out that the master sociologist has yet one more trick up his sleeve-a fifth guidebook, Evidence.

Becker has for seventy years been mulling over the problem of evidence. He argues that social scientists don't take questions about the usefulness of their data as evidence for their ideas seriously enough. For example, researchers have long used the occupation of a person's father as evidence of the family's social class, but studies have shown this to be a flawed measure-for one thing, a lot of people answer that question too vaguely to make the reasoning plausible. The book is filled with examples like this, and Becker uses them to expose a series of errors, suggesting ways to avoid them, or even to turn them into research topics in their own right. He argues strongly that because no data-gathering method produces totally reliable information, a big part of the research job consists of getting rid of error. Readers will find Becker's newest guidebook a valuable tool, useful for social scientists of every variety.

A Preview for this title is currently not available.
More Books By Howard S. Becker
View All

Writing for Social Scientists, Third Edition: How to Start and Finish Your Thesis, Book, or Article, with a Chapter by Pamela Richards
Howard S Becker
Paperback , Sep '20
RRP: $22.95 $22.49